NOT ON MY PLATE: Do You Know Where Your Beef Comes From? 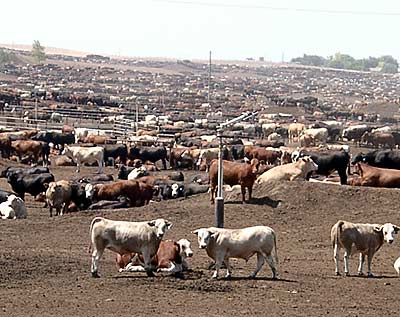 In life there are occasional profound moments of realization. Perhaps the gut-reaction that accompanies those moments is the impetus that sparks change. For me, the practice of humane husbandry in agriculture is a hot button issue. I believe that consumer education and awareness are the keys to affect lasting change; change that is better for us and better for the animals raised for our consumption.

I recently had occasion to travel south on I-5, that interminable stretch of California interstate that transects the central San Joaquin Valley between the Bay Area and Los Angeles. I was driving along as mile after mile melted into the endless oblivion–when I became aware of a terrible smell wafting through the car.

I was approaching Coalinga–an otherwise forgettable place but for Harris Ranch Beef, a commercial feedlot operation on the east banks of the freeway. Here, on approximately one square mile of land, thousands of beef cattle await slaughter; standing in cramped pens atop their own hardened excrement, packed like sardines as far as the eye can see.

Passersby on I-5 may hit the accelerator and avert their eyes in an attempt to avoid looking at the horrific sight, but they cannot outrun the putrid stench of disgrace that assaults their senses and lingers on long after the cattle fade from view. This cannot be ignored.

It’s a sickening scene. I can still feel the bile rising in my throat as I hasten to pass. Anyone who has traveled past Harris Ranch can relate to what I’ve described. It was this feedlot and its unforgettable odor that inspired author Michael Pollan to write The Omnivore’s Dilemma, his renowned treatise on modern-day factory farming.

Large scale commercial farming, which became popular following WWII, has given rise to feed-lot operations like Harris Ranch. Make no mistake about it; this is big business. A family owned operation for over forty years, Harris Ranch produces an estimated 150,000,000 pounds of beef per year as of 2010. This 800 acre feed-lot operation has a population of over 100,000 cattle at any given time.

Sadly, the meat that is processed at Harris Ranch is what most people will purchase at their local grocery store for their family’s consumption. This ranch, the largest feedlot on the west coast, is where the vast mast majority of super market beef comes from nationwide.

Critics have labeled the Harris Ranch operation “cowschwitz“, a nickname referring to the hundreds of cattle slaughtered daily at the facility, and the deplorable living conditions the animals endure prior to their demise.

Typically, cattle arrive at Harris Ranch after spending eight to ten months at pasture on off-site partner ranches to be “finished” at the feedlot for an additional four months on a diet of grain: primarily cheap, commercially produced crops of GMO corn. On their website, Harris Ranch states that it “purchases Midwestern corn by the trainload.” This practice of feeding cattle grain allows profit-driven commercial ranchers to fatten their animals faster resulting in quicker turn around time from birth to slaughter.

But because cows are ruminants, with stomachs designed to digest grass not grain, feeding them corn wreaks havoc on their digestive tract. As a result, the animals can develop severe health problems. To counteract these effects, it has become common practice for commercial farms to include a daily ration of antibiotics in their feed. GMO corn, along with these antibiotics, serves as the basis for Harris Ranch’s “scientifically formulated” rations.

In fact, little is known about the long-term effects of eating animals that have consumed genetically engineered food. Generally, the meat of grain-fed cattle is lower in omega-3 fatty acids (the “good” fat), with higher levels of fat than animals raised entirely on a grass diet. Pesticides from commercial grain crops are also known to accumulate in the fatty tissues of these animals, and it is unclear if the resulting residues are passed on to the consumers who eat them.

Harris Ranch spends a great deal of time and money putting a palatable public face on their operation. Their website boasts photos of juicy steaks, and rooms at their luxury hotel–not photos of their feedlot. Website rhetoric also spins a good deal of PR addressing the food safety standards of their operation, highlighting facility sanitation and residue testing of their beef (for antibiotics and pesticides) as though this is the standard we should set for the meat we consume.

Critics of commercial feed-lot farms point to the increase of cancers, obesity, and other ailments which have steadily increased since it became standard practice to feed cattle cheap grain laced with antibiotics.

Advocates of commercial farming answer that sustainable farm practices like pasture feeding animals may improve our health, but ultimately increases the time between birth and harvest resulting in higher food costs to consumers.

All this doesn’t begin to address the lack of sustainability in commercial farm practices. Ironically, the Harris Ranch website states the following regarding this issue: “The land is not just where we raise our cattle, it’s also where we raise our families. Sustainability means ensuring the land will provide for the next generation by not only focusing on the well-being of our livestock, but also by maintaining the ranching environment”.

Are they kidding? What “environment” are they referring to? Can they actually believe that the cattle crowded into stinking pens standing on compacted refuse, spending their last months without a shred of grass in sight, are part of a livable environment worth touting? Do their families actually live anywhere within olfactory distance of this place?

For me, these issues of humane and sustainable agriculture are critical. As a meat-eater, I have come to terms with the fact that another living, breathing creature has given its life to supply the food on my plate. That’s a hard fact to swallow–one that consumers are spared when they plunk a neatly wrapped cellophane package of meat into their grocery cart without a second thought for the life of the animal that produced it.

I strongly urge you to think before you buy commercially farmed meat. We have an ethical responsibility to demand that the animals raised for our consumption are treated with respect, dignity, and compassion. In doing so, we honor the sacrifice they will make to nourish us. Can we really afford to look the other way?

In the North Bay where I live, Harris Ranch Beef is sold at Costco, Grocery Outlet, Lucky, Safeway, and Mill Valley Market. It is also the meat you consume when you patronize In-N-Out Burger. When you buy this meat you support the businesses that mass produce feed-lot raised beef.

Instead, use your spending dollars to send a clear message: not on my plate. Pledge to eat meat  unadulterated by hormones, pesticides, or antibiotic residues. Strive to support ranches that raise beef humanely on pasture grass.

As a consumer, choose to spend a little more at the check out register to support local Bay Area ranchers like Stemple Creek and Magruder Ranch who embody true sustainable farm practices in raising the beef cattle that will come to your table.