The life of an artisan cheesemaker may not be glamorous, but it is rewarding. Just ask Liam Callahan. He and his wife Diana are the proud proprietors of Bellwether Farms; a family owned and operated artisan creamery on thirty-five bucolic acres tucked into the rural coastal hills off Bodega Highway west of Petaluma, California.

Passersby won’t find a sign marking the farm’s entrance on the main road. Tours are given by appointment only. On this uncharacteristically sunny West Marin morning our small group of journalists and a local chef are arriving by car caravan. Winding our way slowly up the dirt drive, we pass a flock of East Friesian dairy sheep lolling placidly in the adjacent field. We round a bend, still admiring the verdant green hills, and pull up in front of a cluster of outbuildings. The modest creamery displays Bellwether’s logo.

The door swings open and Liam strides out to greet us. He is a tall, strapping man with an easy smile and a sense of contentment that comes from being in his “happy place”. He beckons us inside where we meet his equally statuesque wife, Diana, who exudes warmth and an “I’ve got this” calm. She is the multi-tasking queen who manages the business end of Bellwether, along with the couple’s two active, growing boys. She and Liam are like bookends that hold family and thriving business together along with his mother, matriarch Cindy Callahan who, we are told, is down in the lambing barn. At seventy-something, Cindy still religiously tends the flock and is the first person to welcome each new member.

Cheesemaking wasn’t even a thought when Liam’s parents purchased this property in 1986. Cindy was a nurse who went back to school in midlife and earned a law degree from Hastings School of Law. Her husband, Ed, was an internist at UCSF Medical Center doing research in liver disease. They originally envisioned the farm as a place to escape for quiet weekends in the country with family.

The first sheep arrived on the property that same year and were brought in for natural weed abatement. It wasn’t until a visiting friend from Syria suggested milking them to make yogurt that the idea to start a dairy and artisan creamery took hold.

Intrigued by the idea of making cheese, the Callahans rolled up their sleeves and began experimenting with different recipes. The results of their first efforts were well received by several San Francisco chefs who encouraged them to get serious about starting a business.

Bellwether Farms officially launched its cheesemaking operation in 1990, and in doing so became the first sheep dairy of its kind west of the Mississippi. The modest creamery was originally housed in a 10’ x 20’ repurposed barn on the property.

Two years later, with some cheesemaking success already under their belt, Cindy and Ed traveled to Tuscany where dairy sheep and cheesemaking have long been a part of the culture. There they immersed themselves in learning the craft from local artisans and took a “short course” in cheesemaking. Transformed by the experience, they returned home inspired to make their own version of the distinctive Pecorino Toscano they tasted while in Italy.

Meanwhile, their son Liam had just graduated from UC Berkeley with a degree in Political Economics. At the time, he never envisioned a future in artisan cheesemaking. “I always thought I’d end up being a guide for an outdoor company,” he laughs in hindsight, “but strangely, I took a career aptitude test when I as twelve that showed I was best suited for either International Business or Farming. I thought, ‘Farming? Really?’ We all had a good laugh about it at the time.”

It was his mother who gently persuaded him to join the growing family business. That was 26 years ago. Today Liam lives and breathes cheese. Crafting it is his passion. You can hear the excitement in his voice when he describes the process. “The biggest revelations have come from seeing different cheeses made,” he says thoughtfully. “There are lots of variables involved: tweaks in fermentation, brining vs. dry salting, aging . . . even the naturally existing bacteria in different geographical regions have an effect on the outcome.” 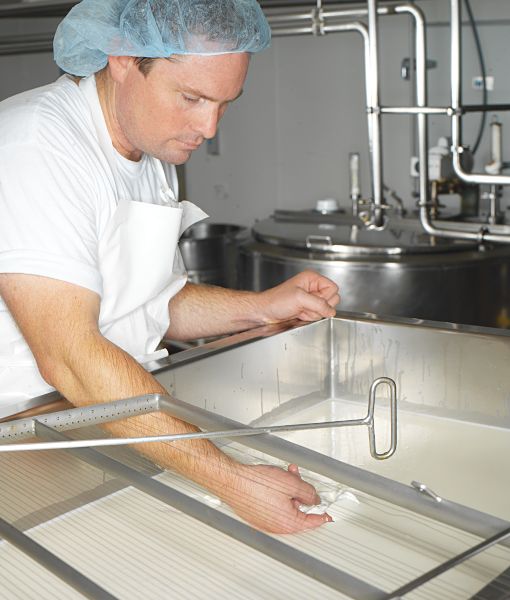 Under his watch, the family’s original creamery has expanded and been modernized from its humble beginnings to keep up with the increased demand for their cheeses. Like his parents, he also spent time in Italy to study and refine his technique in the creameries of Tuscany.
Today, Bellwether’s once modest herd of “wooly weeders” has grown to 350 dairy sheep whose rich, delicious milk goes into their award-winning farmstead cheeses and yogurt. The creamery also sources additional fresh Jersey milk for its products from a nearby dairy.

Our group suits up with hair nets and a sterile shoe wash before following Liam into the depths of the creamery. Today’s cheesemaking is already well underway. Large rectangular vats hold fresh Jersey milk that is being closely monitored as the contents gently heat. Timing and temperature are variable, Callahan explains, but the basic process has remained the same for thousands of years.

He mounts a narrow walkway encircling the vat to check the silky white liquid which is starting to coagulate and form curds. Several minutes later we watch as he cuts the curds into long, even rows with a bladed apparatus. 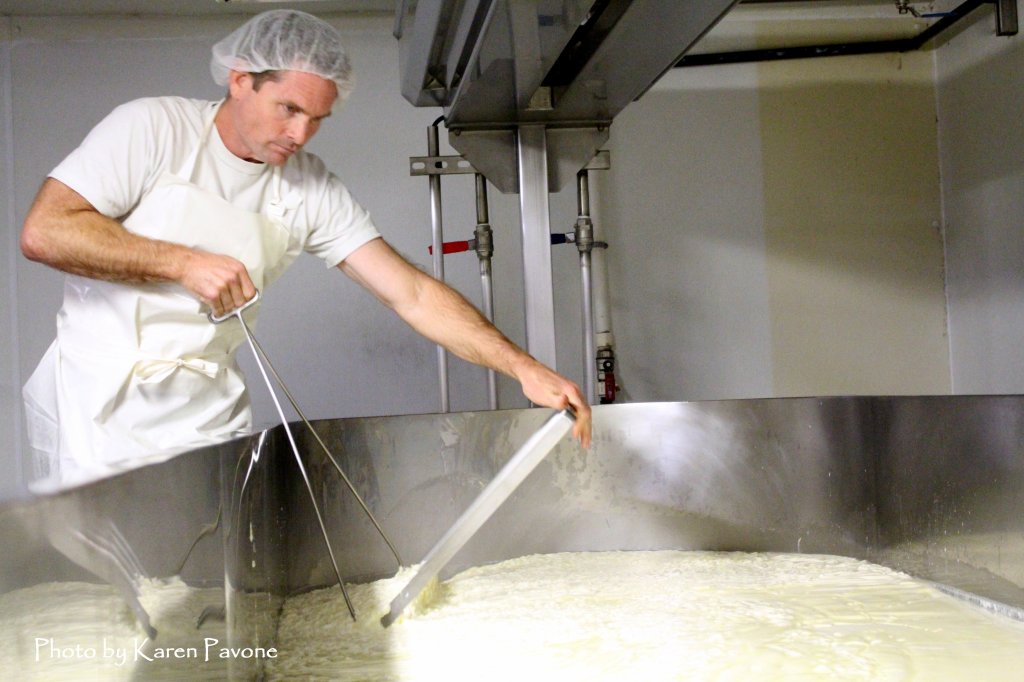 Liam dips a ladle into the mix and draws out a large curd which he cradles in his hands for us to see. It is destined to become Bellwether’s semi-soft Carmody. 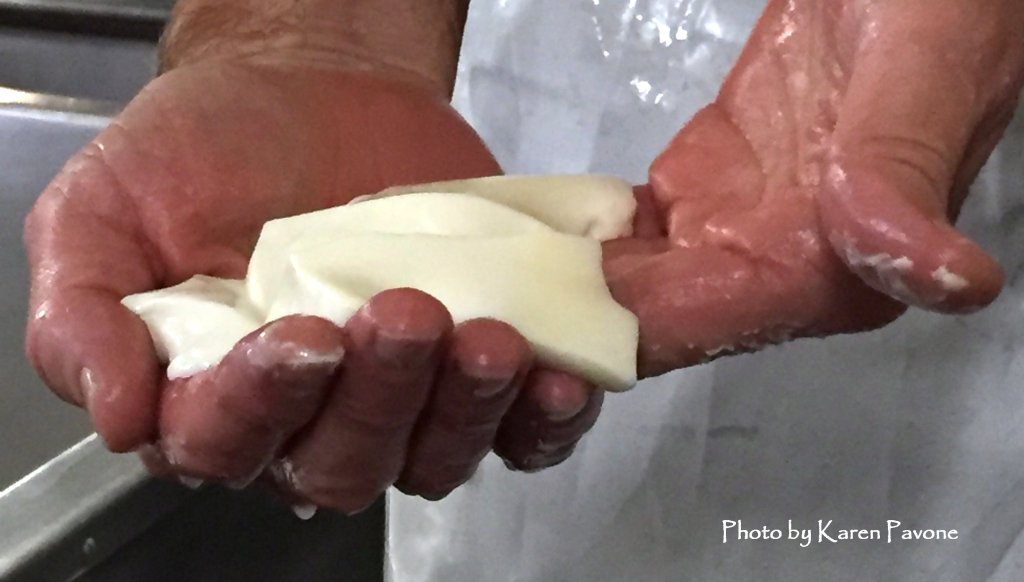 Liam dips a ladle into the steaming vat, and fishes out a sample to test for readiness. 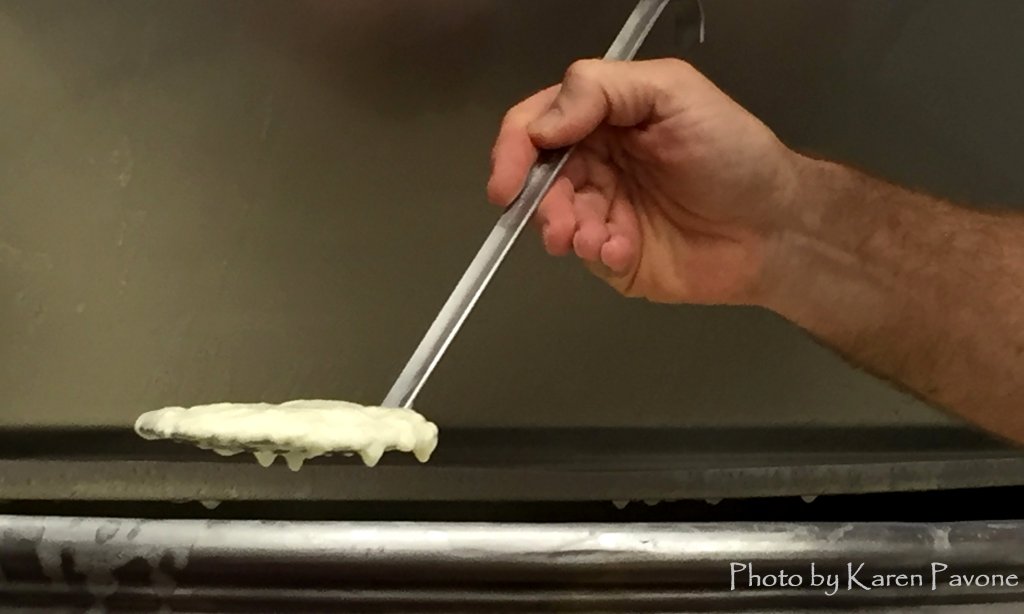 Satisfied with what he finds, he signals a staff member to begin scooping the cheese into porous plastic molds. Once drained of excess liquid whey, the remaining fluffy curds will be hand-dipped into 12 ounce baskets for retail sale.

On a side note, I am totally addicted to Bellwether Whole Milk Basket Ricotta. It is my favorite simple dessert paired with ripe stone fruit or berries in summer, or a spoonful of jam in winter.

Our tour culminates with a visit to the aging room where we revel in floor-to-ceiling pine wood racks stacked with sumptuous wheels of cheese in different stages of development.

It is a cheese lovers paradise; a feast for the senses! We inhale the wonderful pungent aromas wafting through the room, and watch a worker methodically wipe bloomy rounds of Pepato as Liam describes the nuances of his craft.

“We start with a kernel of an idea,” he says when asked how they develop their cheeses, “but we often get unexpected insights along the way that can lead to “happy accidents” in the end.”

In February of this year the Callahans unveiled the newest addition to Bellwether’s line and their first mixed-milk cheese. Blackstone is made from local Jersey cow and sheep milk and studded throughout with whole black peppercorns. Aged for ten weeks, its rind is repeatedly hand-rubbed with a mix of crushed black pepper, oil, finely ground rosemary, and vegetable ash for a distinctive black finish. 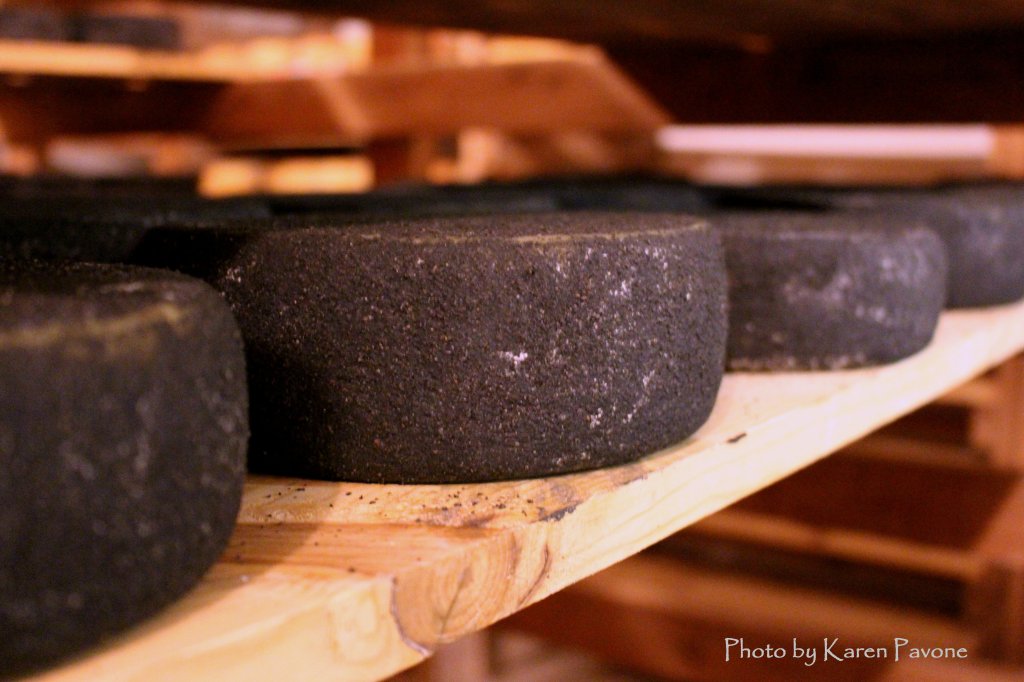 The inspiration for this cheese came to Liam and Diana during a walk through the black lava rock outcroppings near Calistoga, California. Like other Bellwether cheeses before it, Blackstone has been enthusiastically received and recently garnered 1st Place at the distinguished 2016 American Cheese Society competition. It is currently only available in select high-end restaurants.

“I’ve been in this business for twenty-six years and I still get excited when I see our cheese in the marketplace,” says Liam with a sense of awe at his own success. He doesn’t need to go far for affirmation. Bellwether Farms cheeses can be found at gourmet grocers and on the menu at many of the finest restaurants in the country. They have been featured in Wine Spectator, The New York Times, Emeril Lagasse, Sunset Magazine, Williams Sonoma, Cooking Light, and Dean & Deluca to name a few.

Business is good. Almost too good. As Bellwether’s reputation gains momentum their biggest challenge is keeping up with the growing demand for their products. It’s the kind of worry that comes with great success. The Callahans take it gladly in stride as they prepare to celebrate their 25th anniversary in business next year. Bravo Liam!

When cheese is made with the best quality milk and a lot of love it doesn’t require a fancy recipe. It stands alone. Such is the case with Bellwether Farms Whole Milk Basket Ricotta Cheese. I love this simple, creamy indulgence for dessert topped with fresh seasonal fruit or jam. Try it with ripe, juicy summer berries or peaches and prepare to swoon!