Meet Ellen Cavalli and Scott Heath. They are the innovative husband-wife team behind Sonoma county-based Tilted Shed Ciderworks; one of the finest up-and-coming small batch artisan cideries in California. With a personal history that dates back to childhood roots growing up in Alameda, this couple’s journey to cider making evolved in a way they could never have predicted.

In fact, their first encounter with cider came out of necessity. As the story goes Cavalli, a former book and magazine editor, and Heath, a talented master printer of fine art, decided to ditch the rat race and buy a farm in a well-known apple-growing region outside Santa Fe, New Mexico. Settling into their new life, the pair began freelancing from an office they set up in their barn and growing organic vegetables on the side to sell at the local farmers’ market.

As fate would have it, the property came with an established apple orchard that produced a bumper crop that first fall. After eating and canning all they could, Heath came up with the idea of making cider to use up the surplus apples. He got a good deal on a barrel press, and before long they had fresh juice slowly fermenting in their barn during the cold winter months. The moment of truth arrived when they tasted the finished cider. “It was dry, lightly effervescent and not overly sweet,” Ellen recalls excitedly.

They were hooked, and the seed to start their own cidery had been planted. From that moment on they threw themselves into learning everything they could about cider and tasted examples whenever possible.

In 2009, shortly after the birth of their son Benny, the couple decided to return home to Northern California and make their dream a reality. They began looking for acreage around Sebastopol which is reputed as one of the country’s premium apple-growing regions. “We thought, ‘California is known for world-class wine and beer. Why not cider?’ ” says Cavalli.

Then the real work began. Over the next two years they enhanced the existing orchard with more than 60 rare heirloom apple varietals developed in England and France expressly for cidermaking. “Cider apples are different than table apples in the same way that not all grapes make good wine,” Cavalli notes. “They provide structure and depth of flavor that common table fruit cannot.” Tannin content plays the most important role in making exceptional cider. “We use a blend of bittersweet and bittersharp varietals, as well as crossover heirlooms to create the nuanced character notes we’re looking for in our finished ciders,” she says. 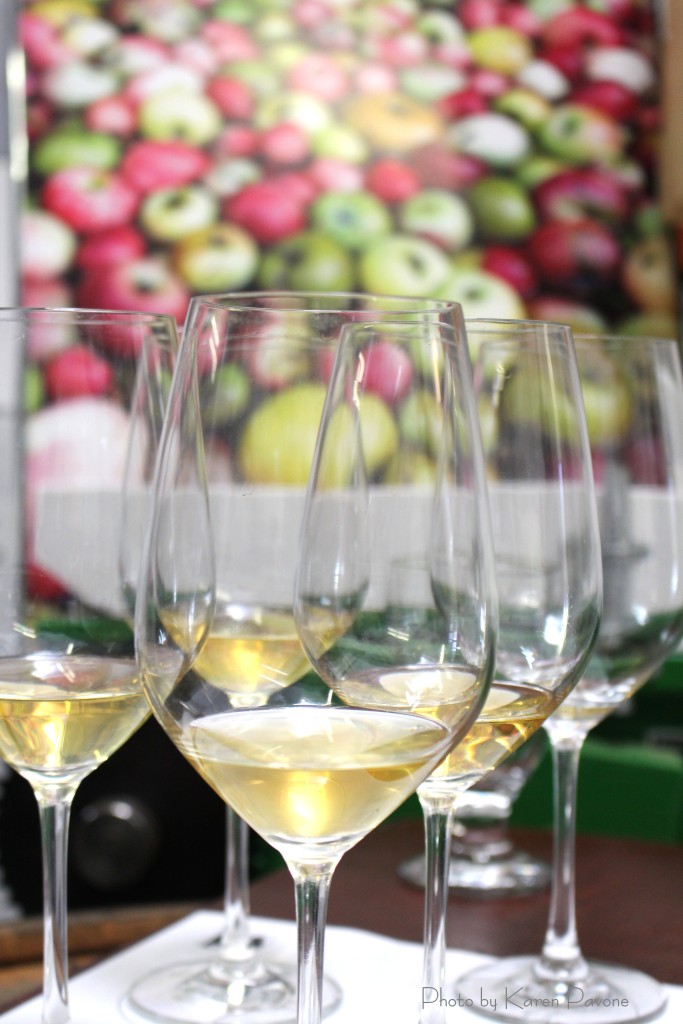 In 2011, just two years after relocating, the pair launched Tilted Shed Ciderworks. By then they were full-fledged “cider evangelists” with a mission “to elevate the apple to greatness” while putting their own unique California interpretation on this beverage.

They have succeeded in doing just that.

“Our ciders have a sophistication, structure and taste that set them apart,” says Cavalli. “The apples hold the secret, and cider is the art.” Four years into their new life, Cavalli and Heath have put everything on the line. “Initially, we fell into this because we love cider,” says Ellen, “but we’re committed to building a vibrant culture here.” The artisan cidery takes great pride in using only 100 percent organically grown Sonoma County fruit in its products. 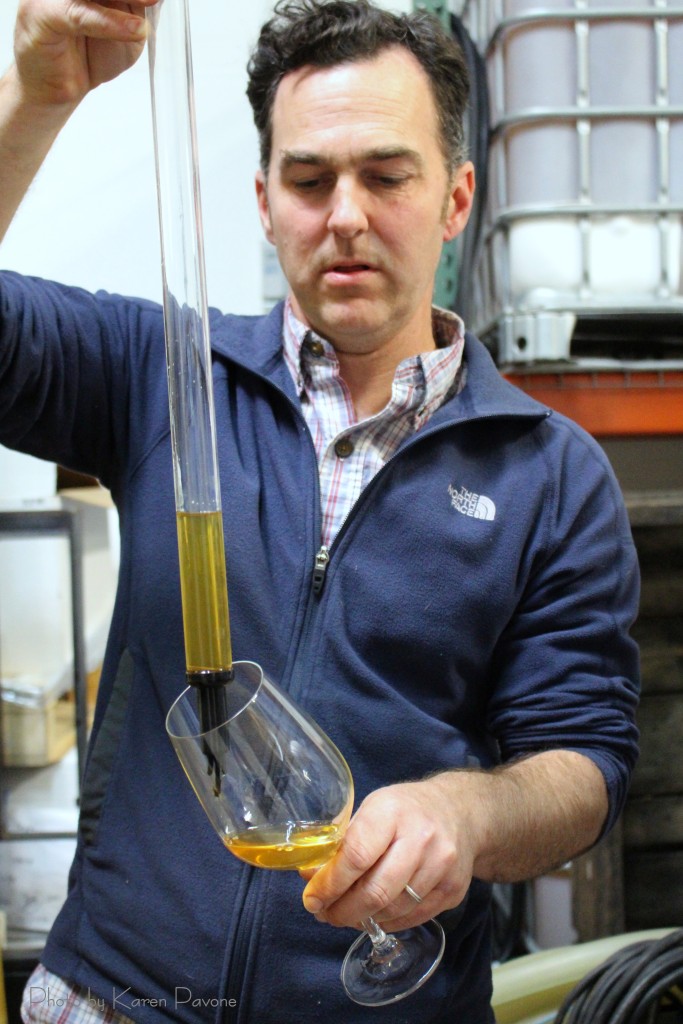 Their timing would seem to be perfect. Hard cider is experiencing an explosive renaissance among consumers, and is currently the fastest growing sector of the craft beverage industry. That’s pretty impressive for a humble, apple-centric sip! Despite their growing notoriety and sold out releases, the couple plans to keep production small. “This is a mom-and-pop operation,” Cavalli shares. “Our cider is a seasonal product, and the process involves intense, hands-on labor with no shortcuts.” Though they’ve upgraded to a hydraulic press, she and Heath still makeup the cidery’s entire workforce.

If you haven’t tasted hard cider, do yourself a favor and plan to visit their new “cider salon” in Windsor, California. I recently attended a Cider Appreciation 101 workshop at this venue led by Cavalli and Tom Wark. Wark is a celebrated writer, cider critic, and publisher of The Cider Journal which has become a go-to reference guide for both trade and aficionados of cider.

Tasting cider is a sensory experience that should be appreciated in much the same way one would evaluate a fine wine. Wark and Cavalli expertly guided our group through a five-flight tasting of Tilted Shed’s offerings, and offered the following guidelines for optimal cider enjoyment: 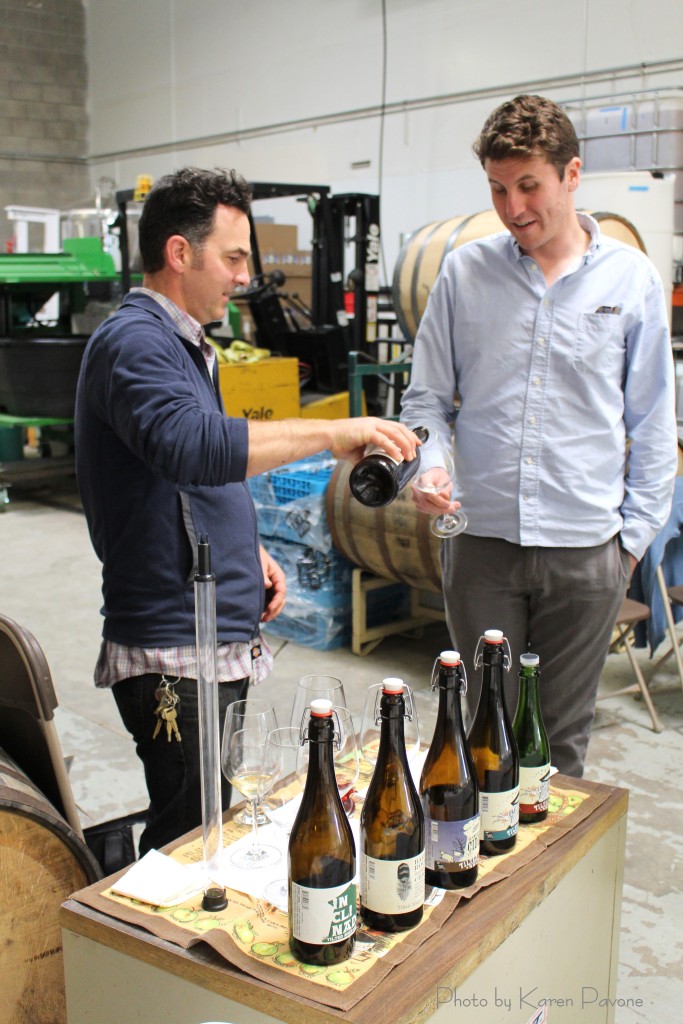 The Tilted Shed Ciderworks tasting room in Windsor is open most Saturdays from 11 a.m. to 4 p.m.  For more information, visit their website.

If you’d like to spend an afternoon in cider nirvana, head on over to the 2nd annual Cider Summit at the Civil War Parade Grounds  in San Francisco’s historic Presidio on Saturday, April 25th from noon to 6:00pm. Cider lovers can taste over 150 ciders from 46 cideries including 74 ciders from California, and other regional favorites and international classics. Get your tickets now!