These days, Indian Valley based Barba Rossa Farms is literally buzzing with excitement. It’s home to some happy bees, thanks to the careful attention of local beekeeper Rob Tysinger and his wife Karen. Summer is the peak season for honey production, and Rob’s bees have kicked into high gear. 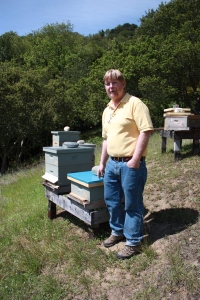 Rob saunters out to greet me, bees dancing through the air around our heads. I marvel at their precision in flight; they dart about with purpose and, although close, largely ignore our presence. They are focused on more important business, like their commitment to collecting nectar and pollen for the survival of the colony.

Tysinger is unphased by all the aerial activity–his even-keeled, calm demeanor and signature red beard (thus the name “Barba Rossa” which means “red beard” in Italian) giving no hint of the wealth of information he possesses about bees.

A structural engineer by trade, Rob first got the bug for bees six years ago when he and Karen moved to their 1.7 acre property off Pacheco Avenue in rural Novato. Settling into their new home they began the process of cultivating the grounds, planting, among other things, a small orchard. But despite careful tending, they were dismayed when the trees did not yield fruit. Turns out the problem was a lack of pollinators in the area; specifically bees. The obvious solution to Tysinger: if there weren’t enough bees in the area to pollinate the trees, they would have to establish their own colony.

As luck would have it, a friend told Tysinger about an upcoming class for beginning beekeepers offered by the San Francisco Beekeepers Association. Completing the course, Rob took the plunge and ordered two “packages” of European Honey Bees–three pounds of bees in all with a mated queen–everything needed to start his first hive.

It is a well documented fact that bee populations worldwide have experienced a steady and devastating decline since 2006–resulting in an estimated loss of between 30% to 90% of honeybee colonies. This phenomenon known as “colony collapse disorder” has alarmed scientists, farmers, and beekeepers, and has had a profound effect on our food supply.

Beyond their importance as honey makers, bees are responsible for pollinating roughly one-third of crop species in the United States, including fruits, vegetables, nuts, and feed grasses like alfalfa and clover. Without bees to pollinate crops and orchards, experts estimate billions of dollars in agricultural losses.

Researchers are working diligently to discover the root cause of this phenomenon. One recent study, published in April of this year by the Harvard School of Public Health suggests one possible culprit behind sudden bee deaths is an insecticide commonly used by large scale commercial farmers called imidacloprid, but the jury is still out on these findings.

Luckily for Tysinger’s colony there is plenty of natural forage available in Novato. His worker honeybees scavenge local hills and gardens, collecting pollen and nectar to make into his delicious Barba Rossa Farms wildflower honey.

Back at the hive, bees pack individual honeycomb cells with either pollen or nectar. Temperatures inside the hive hover in the low 90’s, creating heat which evaporates the water in the nectar. The addition of natural enzymes from the bees makes honey. Once the desired consistency is achieved, the bees “cap” the honey-filled cells in the comb where they remain until harvested.

Bees produce most of their honey in the summer months as a collected food store for the colony during the dormant winter season. For them, making “liquid gold” is a means of survival. When beekeepers harvest honey from the hives, the bees rush to produce more.

Six years after establishing his first hive, Tysinger now has 16 active hives on his property, each housing between 30,000 to 50,000 bees. His colonies collect pollen and nectar in a two to three-mile radius from the hives, performing the essential job of pollinating his and his neighbor’s orchards and gardens. In July and August, at the height of the production season, his hives will yield around 25 pounds of local wildflower honey apiece.

Sensing that I am an adventurous spirit, Rob invites me to “suit-up” for a close-up interior tour of a hive. He offers me the traditional garb of a beekeeper–a full-meshed hood and long-sleeved tunic made of material thick enough to provide a sense of safety to novices like me. As I pull on my gear, Rob prepares a small stainless steel smoker, stoked with pine needles and redwood, that will temporarily sedate the bees when puffed into the hive.

With slow, deliberate expertise he approaches a nearby hive gently prying open the lid with a special tool. The bees flying overhead do not seem overly upset by this intrusion, hovering in a group waiting for us to complete our task so they may enter.

Rob sets the lid to one side, delivering a couple of puffs of smoke to the colony within. Then, with infinite care, he uses another implement to carefully remove a frame from the wood hive. As he draws the frame out, I see a throng of bees–slightly stoned and moving around the honeycomb like Manhattan at rush hour. I marvel at the super organism of the hive, made up of individuals functioning as a whole. I also note that Rob’s hands are bare as he handles each frame–a beekeeper’s thick gloves too bulky to finesse them from the hive. Although they could, the bees do not sting him.

To extract the honey stored in the combs, he explains, a hot knife is scraped over the surface to cut off the sealed caps. Then the frame is placed in a centrifuge where the honey spins out and is captured for jarring. Each of Tysinger’s wood hives contains four to seven frames of honeycomb, separated by “follower boards” to offer better ventilation.

“Let’s see if we can find the queen,” he muses, plying the next frame from its cell. One by one he inspects each comb, at last rewarded by his persistence. “There she is!” he notes triumphantly gesturing to the moving mass of bees he holds in his hand. My eyes scour the throng, settling at last on the queen–distinguished by her slightly larger size and smooth thorax. Satisfied at last, Rob replaces the frame and carefully closes the hive, making sure not to crunch one of his workers in the process. As if signaled, the bees that have gathered in the air overhead patiently waiting for us to finish resume their march into the hive.

The proof of all this work is evident in the taste and quality of the finished honey. Tysinger’s product is considered raw and unfiltered, strained only once. As a result it still contains small amounts of pollen, which may make it beneficial to people who suffer from seasonal allergies–particularly since it comes from locally foraged sources.

Barba Rossa Farms wildflower honey is available for a limited time and in limited quantities: a 12 oz. jar runs $12; a 20 oz. jar is $15. You can place an order for honey by contacting Rob Tysinger directly at robbiet@comcast.net. You can also Barba Rossa Farms honey at Farm Girl Nursery, 100 Pacheco Avenue, Novato, open Wednesdays and Saturdays from 10:00AM-4:00PM.